The stage is bare, the brickwork at the back of the stage showing, and props such as a record player, photographic developing equipment and a massive set of metal stairs, all pushed to the edges.  Electric strip lights drown the stage in glaring brightness. On walks an actor with a hand held microphone, and what appears to be a reminder to the audience to turn off their mobile phones, cleverly becomes a monologue about truth, lies and storytelling.  And we’re off. Into Ibsen’s twentieth play written, as we are told numerous times during the play, in 1884. But this isn’t a exactly a straight performance of play, as the unconventional opening suggests. Throughout it hand held microphones are passed baton-like between the actors, as like some kind of talking stick, once received they reveal a truth to the lies spoken by their characters: “he lied”, “it was more than three” “he didn’t come back that night”.

This might seem a bit too self-knowing or like a comic wink direct to camera breaking the fourth wall.  But here, in the hands of Robert Icke, it is a device that allows the characters almost to confess or come clean about what has been said. Nor is this some sort of academic textual analysis of the play, although it certainly does allow for some meta analysis of Ibsen, and his own illegitimate child born to a servant girl and who he paid maintenance to until she was thirteen.  Instead it makes the play richer, the pacing faster, the narrative more meaningful, which combined with the updating of the language and references, creates an even more powerful production.

After the opening speech to the audience by Gregory Wood (Kevin Harvey) you move into the opening act outside the Wood’s family home (microphone – “end scene”), then quickly into the apartment of his friend James Ekdal (Edward Hogg). Here you remain to become immersed in the Ekdal family, their struggles, their love, their happiness. And whilst we learn that this is built upon the shakiest of foundations (this is Ibsen after all!) you really felt, despite all the trials they had been through as a family, that there was genuine warmth and love here.

Wild Duck is not a play I knew before, so the story and emotional journey of the characters were all fresh to me.  It doesn’t always follow that a classic play is gripping, but here I was on the edge of my seat.  I thought the acting from the whole cast was simply outstanding.  I believed in every character. I felt the emotion and turmoil and pain of them all.  Nicholas Farrell who plays the grandfather was wonderful in his playful tender scenes with his granddaughter (Grace Doherty on the night I saw this).  Edward Hogg and Lyndsey Marshall as Gina Ekdaly felt entirely believable as husband and wife, from their most tender moments to their pain as the world comes crashing down around them.  But even minor characters like Andrea Hall as Anna or Rich Warden as the drunk doctor neighbour, felt like real fully rounded characters. In part this was due to the writing in this adaptation, but it was also due to great performances given by the whole cast. There was a palpable chemistry on stage.

Bunny Christie’s set design should also get a mention.  Despite the apparent sparseness at the start, the set builds incrementally through props and subtle lighting changes, reaching what can only be described as the set designers equivalent of a crescendo, which I feel should not be revealed at the risk of spoiling the impact on the audience.

In short this play and this production was for me pure theatre magic. I was entranced from the moment it started to the very end. Robert Icke is a true master. I left happy and elated, despite the bleakness and dark themes the play explores. This is what great theatre looks like. 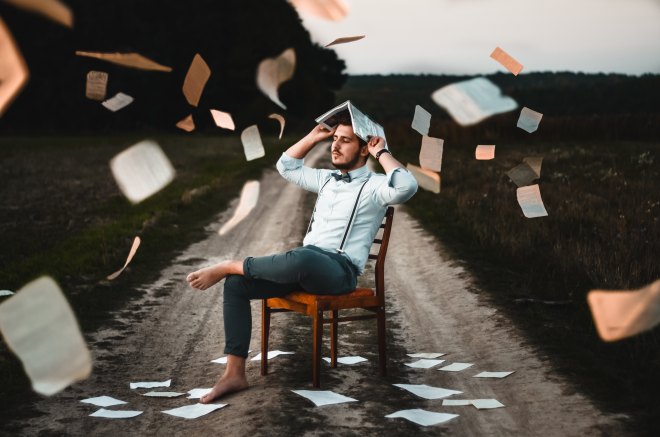 You need a hook, a backstory.  That’s the idea. Mine is a former English teacher called Mr Rowlinson.  Back then (in the 1980s) he taught the first two years at secondary school.  It was not a traditional classroom, but one set up with benches, four rows, divided in the middle, facing towards a raised platform that was to act as our stage.  The division down the middle of the seats split the class into two, and each half of the class for the rest of that year then formed a theatrical team, which was given the name of a guild – ours was the Haberdashers Guild.  A play for the term was selected by Mr Rowlinson (or possibly as part of a unseen curriculum), usually Shakespeare, and each guild then alternated each scene within the play.  For those within each guild we had to select the actors, others to do the lighting design, or select and queue music (from a selection of old classical 78s), those to arrange the set (we had limited blocks to move about and no chance of painting scenery) and even someone to write up and design a poster for the production.

This then was really my first introduction to both Shakespeare and the complete workings of the theatre (within our limited remit).  I’m discounting the primary school production of Joseph and the Amazing Technicolour Dreamcoat, or even a pre-prep school foray treading the boards for some production – was it Annie? – where the Headmistress insisted everyone, including the boys, learnt ballet.  Those earlier exposures were nothing like as intensive or broad as those first two years in the upper school.

So I should probably state that at the time this was an all boys school.  As a result, in good Elizabethan theatrical style, the female roles were naturally also played by us boys.  And as luck would have it I managed to get the roles of Calpurnia, Julia Caesar’s wife and Lady Macbeth. I also played Heracles as the deus ex machina finale in Philoctetes by Sophocles as the end of year production in front of parents.  And once I played one of two crows in some random Scottish ballad, the details I now forget, other than my fellow crow and I both studied crows on the school playing fields to check if they walked or hopped about, and any other elements of realism two teenage boys could bring to a crow on stage.

I never though plucked up the courage to audition for any of the main school plays that pulled talent from across the school.  Although as we moved up through the school our English classes always involved some end of term performance in front of parents.  I recall we performed an extract of Henry IV Part 1, although I don’t now remember the part I played.  More fun in those years was that we got to write our own pieces.  Initially we wrote plays about soldiers and officers in the trenches of World War One and then later we got to write and perform comedy sketches.

There was one other English teacher I should probably thank for my love of theatre now, and that was a Mr Porter.  I chose not to take A Level English (for reasons I wont explain here otherwise this is just becoming an autobiography of schoolboy memories), but had I done so, or had I auditioned for the main school play, then Mr Porter would have been a far more prominent figure.  As it was, and I’m not quite sure how, by the time I entered the Sixth Form I was known to enjoy going to the theatre, and when there were spaces on trips to London to see a performance, I would be able to join.  These were often classes for younger years, such as those doing their GCSEs.  I remember getting to see productions at both the National (Daniel Day Lewis in Hamlet) and the Young Vic (Corialanus).  So I owe a debt of gratitude to Mr Porter to allow me to go.

There is one final reason for naming this blog after my first English teacher.  And it is this.  He marked our homework – for we did also have to write stories and poetry – out of 20.  He was a very tough marker.  For the first term I was getting 12 or 13 only.  And gradually when you got back your exercise books and you got your first 14, then 15 and incredibly 16, it was something you really felt you had earned.  I did reach the dizzying heights of a few 17s, and if memory serves me well one 18.  But never more. Never higher.

So when some years ago, prompted by another avid theatregoer I started giving a score for the productions I’d seen.  This was only ever for my own use, or to cross reference with my friend to see what he thought of a play.  Quickly though I found the usual five-star rating wholly inadequate for my needs.  And after a brief period rating out of 10, I recalled Mr Rowlinson’s homework marking out of 20 and decided this would give me sufficient breadth and range to allow me to mark what I have seen.  Then, as I’m often to be found at the theatre, friends would ask for recommendations.  Whilst I’d tweet or mention on Facebook what I’d seen I knew that ideally I would need a bit more space to expand on my thoughts about something I’d seen.  And as a good number of friends asked, I thought perhaps a blog might be the best platform. And so Rowlinson’s Report is now born.

Perhaps one final comment should be given to the fact that I deem the scores to be a little bit fluid.  I tend to come out of a production with an idea, but sometimes a few days later, or longer, I’ll think no this was better or worse than I marked it.  Often there’s a little bit of horse-trading with myself and other productions I’ve seen in the year.  Was it better than X that I scored 16? Perhaps not.  So I’ll adjust accordingly. It’s never a wild variation, and by the end of the year, everything is locked and I don’t go back and change them.